I’m delighted to announce after the success of our first event, Dales Wargames are holding a follow up 7TV games day on Sunday 17th November.  We still have plenty of spaces left, so if anyone is reading this and is interested please see the full details here. 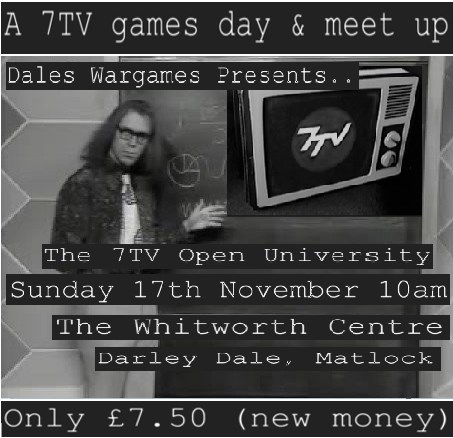 Three full games at 40 ratings, any casts from across any 7TV sets (although for balance, no Apocalypse vehicles), custom casts welcome.

We are keen to spread the 7TV love, so if you’ve never played before or are just curious there will be pre-built casts available to borrow on the day and support available to learn the game. It is 7TV University after all. (Kipper ties are mandatory!)

Cost is £7.50, paid either in advance or on the day (just let us know you are coming).  It’s also a normal meeting date for the Dales Wargames club, so if for some (crazy) reason you don’t want to play 7TV ago come along anyway, there’s bound to be something of interest (including cake).

The venue is the beautiful Whitworth Centre in Darley Dale, near Matlock on the edge of the Peak District with easy access from the M1.

One of our regular rooms

So in amongst all the other stuff I have going on (including a new resin 3D printer, more on which another time), I am still working my way through the big pile of lead from the 7TV Apocalypse Kickstarter.

This time up its the turn of the Creepers!  These miniatures were multi-part so required a bit of superglue magic (i.e. activator) to get built.  They are very much an ode to those killer plants from an early eighties BBC TV adaption of a classic sci fi novel.  They are ‘triffic’ sculpts.

Having had a break from the airbrush for a few months (I tend to do all my spraying with rattle cans, especially basecoating outside while the weather is good), I decided to crack it out again for these guys.  Over a white undercoat, building up a couple of successively lighter layers of green worked really well.  I supplemented this with the use of yellow washes/glazes and a purple contrast paint to make it all look suitably organic and plant-like. 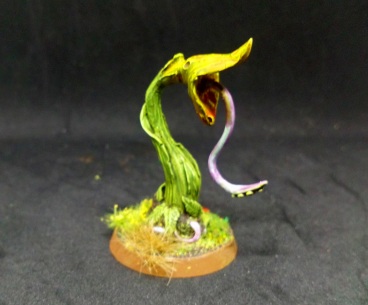 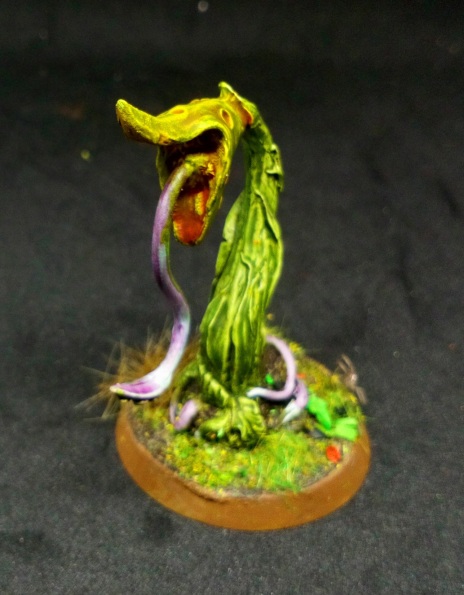 I went to town on the basing with these, swapping out to some of the (now standard for Space Marines anyway) 32mm round bases from Games Workshop.  I added in various tufts, flock and static grass to tie in with the theme. 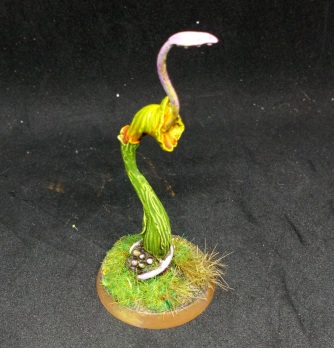 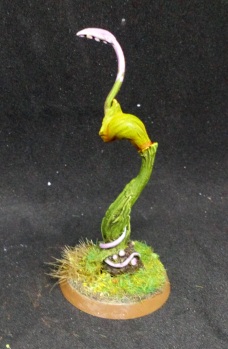 I also found the time to complete another of the cultists from the set, a rather lost looking survivor and am continuing to work on the motorbike gang. 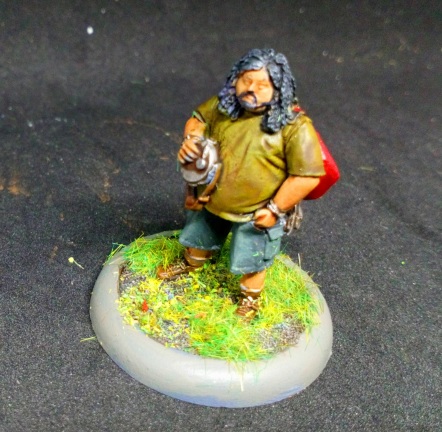 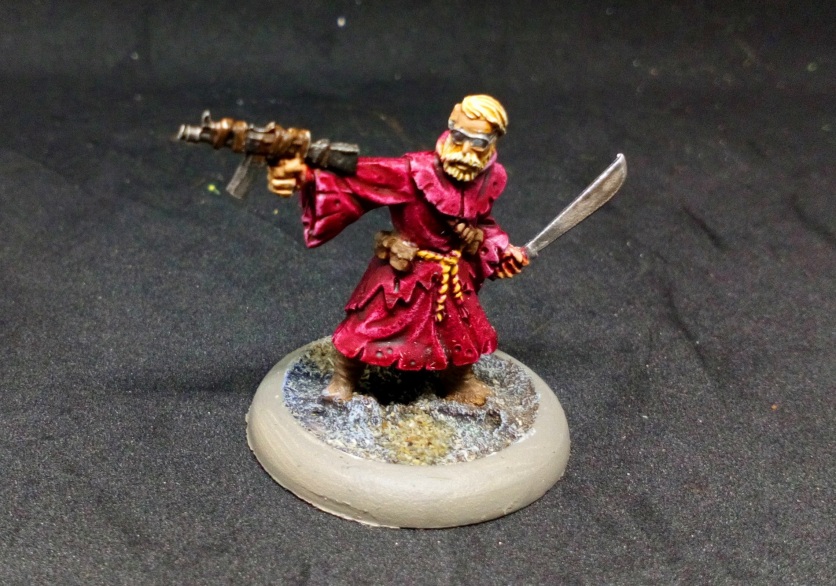 A while back something caught my eye.  Not unusual for a hobby butterfly, this was on Kickstarter and was for the Monolith Games Batman Gotham City Chronicles board game.  Ultimately a bout of common sense took over and I didn’t hand over the big bucks for this.

Fast forward a couple of years and now that 7TV Pulp has been released the alure of doing a game if not with full blown superheroes at least with costumed vigilantes was strong.  What really attracted to me Gotham City Chronicles originally was (as with a lot of things) the miniatures.  I’d previously owned and played the Conan game upon which Batman was based, and liked it, although I found it a bit over complicated.  But the figures….

Quick trip to eBay and I found a reasonably priced base pledge from the Kickstarter and after an abortive attempt to play the game at one of my regular Wednesday night gaming sessions I then switched my attention to getting some paint down on some figures.  Oh, of course, thinking about how to port this to 7TV.

First off the issue of scale.  The miniatures in Gotham City Chronicles are (in the majority of cases) one-piece.  They are all PVC plastic, but don’t suffer at all from ‘bendy sword syndrome’.  They are also on the big side – I’d say on the upper end of 32 to 35mm scale – almost ‘heroic 1:48’.

So is that actually a problem for 7TV? Well obviously not if you are playing exclusively with these miniatures, but what if you want to do some mixing and matching?  To be honest, I can live with it.  In true 7TV style if it was noticeable it could always be passed off as a continuity error in the production!  I have in fact played a game using a standard 28mm scale cast against some chibi miniatures before – in my mind we were filming a crazy mix of animation and live action – ‘who framed Hugo Solomon?’ if you will. 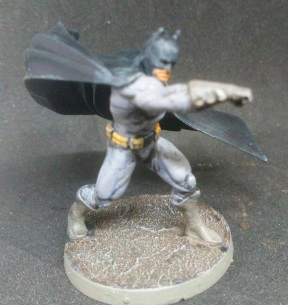 One of four Batman minis in the base set 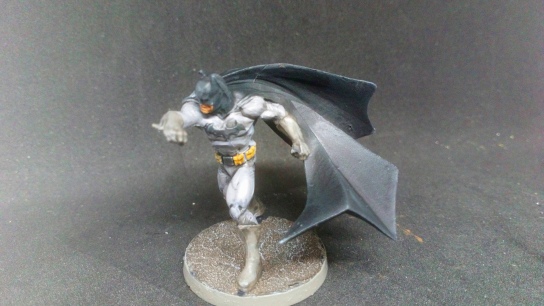 So far I have been concentrating on the good guys.  As alluded to above, the thing that helps with the Batman setting (at least within the confines of the majority of the figures I have available) is that super powers are not really a major thing.  Most of the good guys (Batman, Robin, Batgirl and so on) are gadget laden combat specialists – sounds an ideal fit for the archetype approach 7TV takes to customising casts.  Likewise with the villians.  In fact even the addition of some limited super powers into the mix could probably be easily modelled using the guidelines in the various boxed sets available from Crooked Dice.

So far I have only got the Batman himself stated up.  I used the base stats from the  ‘Crusading Crimefigher’ profile in the 7TV Pulp box and then adjusted the star quality and abilities according.  I wanted to give some Batman flavour to these, but avoid creating any new rules and abilities.  I therefore looked across the different 7TV books and profiles to see what I could switch out.

I switched in the ‘Pulse Pounding Action’ star quality from the Pulp ‘Intrepid Adventurer’ profile (but renamed this ‘Dark Knight).  This gives me a super strong close combat option, which seems about right, and I supplemented this with the ‘Martial Arts’ ability from the ‘Spy-Fy’ profiles.  Bruce Wayne loves gadgets, so to replicate this for his alter ego I included the ‘Gadget’ ability and then to make sure Batman’s detective skills are (kind of) represented I also added ‘Spy’ (again renamed for ‘flavour’).  Trying to stick to only four abilities became tricky here – there are loads of things that fit, but in the end I went for ‘Jump’ at the expense of ‘Climb’.

So still work in progress, and yet to be tried in a game, so likely to be changed.  I am planning on adding Robin to the initial cast and will need to profile him up.  As for extras I’ll go with the existing 7TV cop profiles to add some of Gotham City’s finest into the mix.