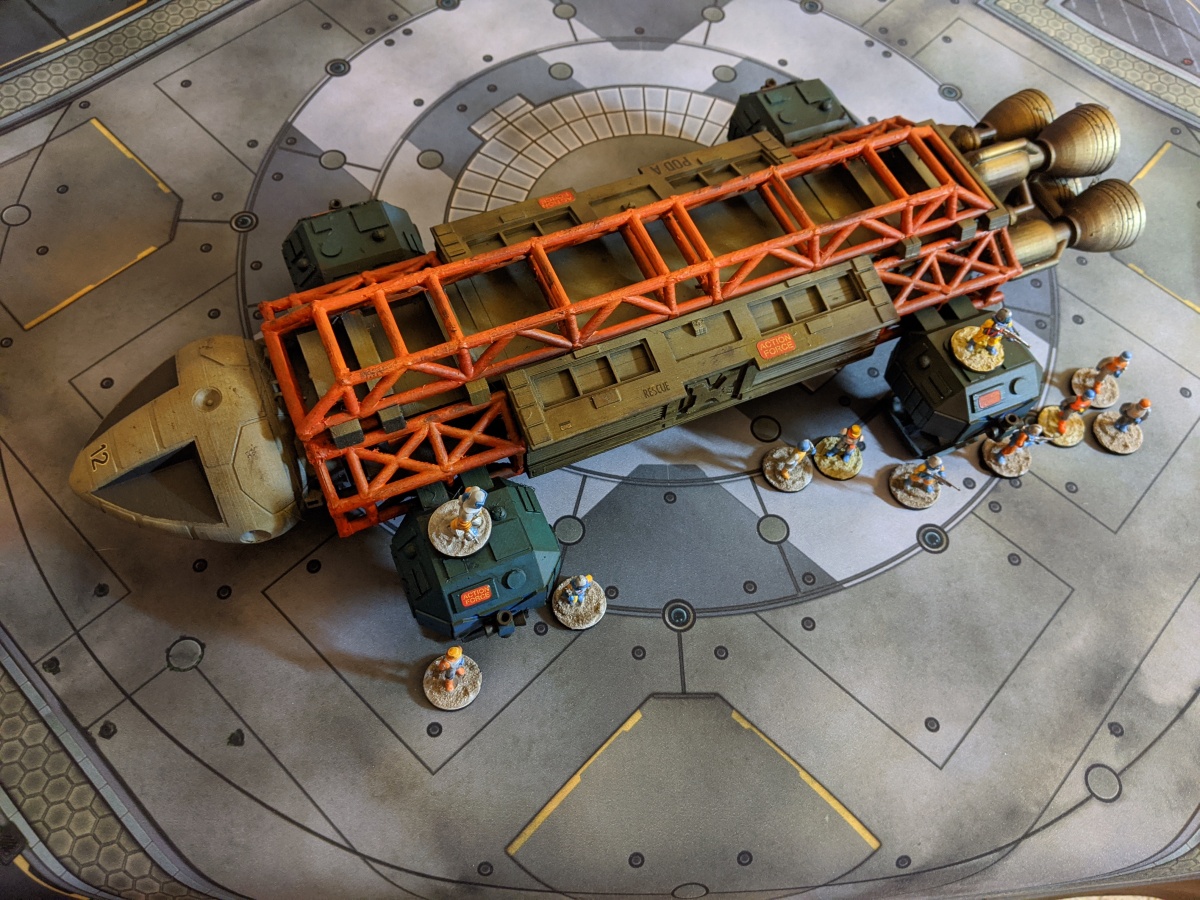 This is the culmination of about four months worth of work. I came across this excellent set of 3D print files by alpokemon on Thingiverse earlier this year. For those that don’t know this is the classic Eagle Transporter from Gerry Anderson’s Space 1999.

I set about printing this with the idea of using it as a centrepiece for 28mm scale gaming (more specifically 7TV). By doing some back of the envelope calculations I worked out that I would need to scale the files up in order to meet my favoured 1/48 vehicle scale for gaming.

So then the printing began……and it took a very long time indeed.

Back in March I was keeping a log of how much time the individual print jobs were taking. I soon gave up adding this up, but lets say we are talking about well over 100 hours worth of printing at least.

As per usual for scenery and vehicles I printed this using my FDM printer, a CR-10S by Creality. I originally chose this printer for the larger than standard print bed size and this was very useful when printing out this model.

The print quality (and tolerances) I am getting at the moment are really good, which helped significantly with this model as it did require quite a bit of fitting and assembly. The one weak point was the landing gear which have snapped numerous times and have been continually super glued back together.

At this point I started to think about painting and colour schemes. Rather than paint up in the traditional TV series colours I decided to merge this with one of my other ongoing projects – Action Force in 28mm scale. At this point I need to take a slight diversion, promoted by this project I have recently got into collecting the original toy line of 3.75″ (1/18) scale action figures and vehicle sets. One of the vehicles I have recently aquired is the Space Force Cosmic Cruiser. It is this that I decided to base the Eagle paint scheme on.

Due to the current long summer hours and (occasional) decent days of British summer weather I switched my airbrushing to outside. This has been aided by the aquisition of a new mini-compressor. The completed model after getting an all over undercoat of black from a spray can was ready for airbrushing.

The main body and cockpit were given coats of progressively slightly lighter coats of grey.

The four ‘legs’ of the craft were then completed using the same technique with blue.

Finally the engines were also airbrushed using a base gun metal followed by a silver highlight. All paints were from the Vallejo Game Air or Model Air ranges.

I switched back to traditional brushwork for the orange of the frame. This was mainly because I would have struggled to effectively mask the model for airbrushing on top of the work I had already done.

I went to my stash of decals and transfers to add some detail (including some small reporduction Action Force logo toy vehicle stickers). The one thing I wasn’t able to source was the Space Force specific logo. While in the past for miniatures I have hand painted this I wasn’t confident I’d be able to do a good job of this freehand at this scale. I may subsequently add something to the nose cone of the ship if I can figure out printing on decal paper on my Inkjet printer.

The final stage was weathering, and as per usual I feel I may have gone a little overboard here. I used a mix of Plastic Soldier Company and Modelmates weathering spray cans for this, plus a sponge chipping technique using a dark brown paint. I do think the engines came out looking pretty good.

All in all I am really please with the result and I look forward at some point in the future (when face-to-face gaming can resume in earnest) using this in a game of 7TV. Perhaps as part of a Space Force versus The Argonauts game (the latter of which I am eagerly awaiting delivery from the most recent Crooked Dice Game Design Studio Kickstarter).

In the meantime here is a selection of images showing a Space Force Eagle Transporter being prepared for a mission by Action Force personel. All figures are from Gripping Beast and are heavily inspired by the original action figure line.

I bought these figures before Christmas and they had been sat mostly complete and just requiring some finishing touches for a while. I finally got round to tidying up and basing these the other day.

They are a mix here of miniatures from the Pulp Figures and Artizan Designs ranges, all in that niche Pulp genre that borders on Steampunk – the world of airships and rocket men. Think Sky Captain and World of Tomorrow and you’ll not be far away.

In addition I dug out some miniatures I completed a while ago to join the team.

I’m looking at fielding these in games of 7TV Pulp and have some transport lined up for them in the shape of one of the more industrial looking airships from the recent Skys of Sordane Kickstarter which I backed earlier in the year and which is now starting to deliver (in the form of STL files for 3D printing).

Finally here we have a group shot of the full team…..

Some 3D printed scenery I have been working on for a very long time and which will finally see the gaming table on Saturday at a 7TV event I am going to.
Shot from an 'Into the Dark' Kill Team at the weekend. My Rogue Trader team fell to the Gellerpox Infected.
More dwarves in space!