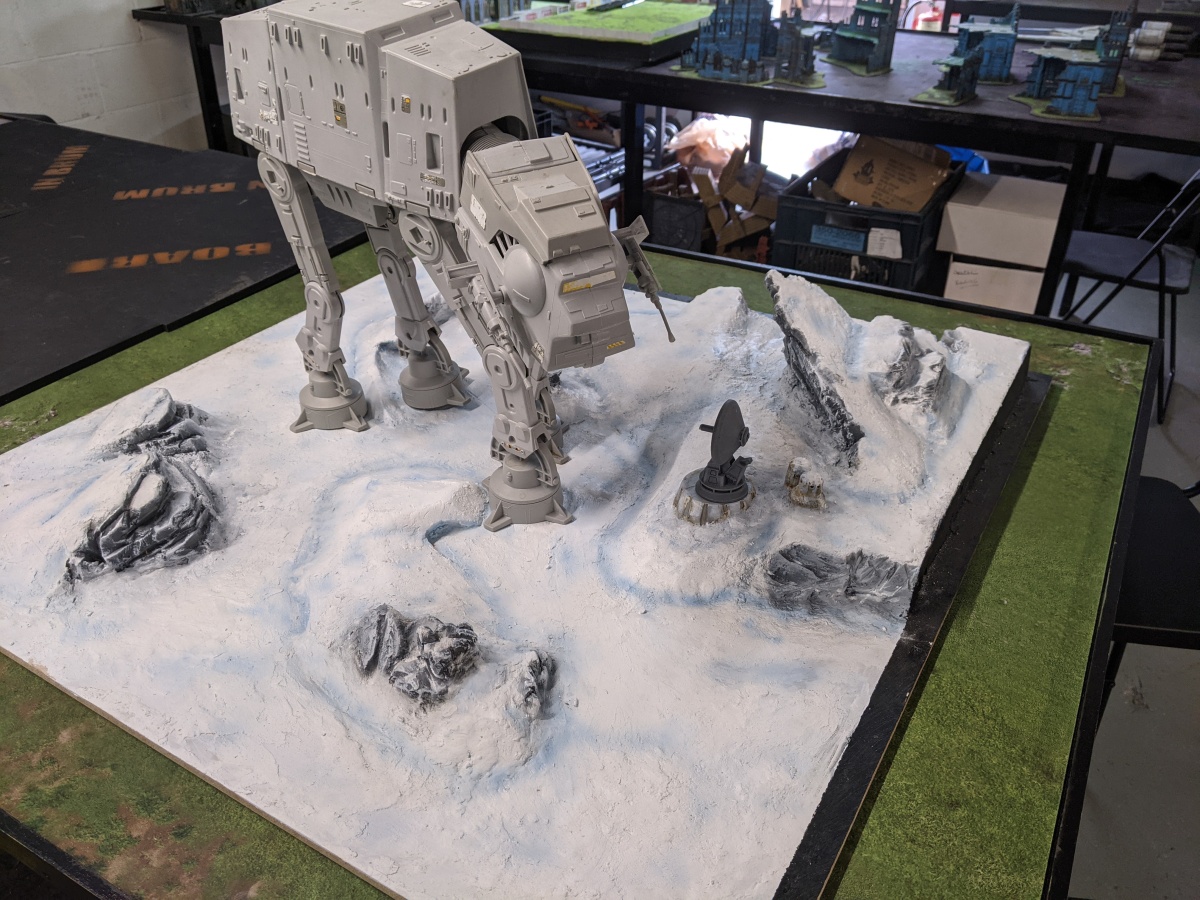 I’m pretty late to the party with both of these, but over the last month or so I have actually attended some real events with real people.

First up back in September was a visit to Board in Brum in Walsall for a day of gaming in a galaxy far far away. Using the 7TV rules, Star Wars was the order of the day. This was my first time playing 7TV since the participation game I ran at Hammerhead back in March 2020. Much fun was had, all three games were lost (of course) and it was just great to be out there rolling dice with folk again.

I’m terrible at remembering the detail of games, other than to start with I had my first ever match up with my good buddy Wayne (of Tangent Miniatures fame). My force was mainly 3D printed and based around a post Return of the Jedi ‘Imperial Remnant’ faction. Most of the models were from SkullForge Studios, with some coming from Miller Bros. Sculpting and Design and a couple of actual ‘Legion’ plastic minis thrown in too.

Wayne’s bovine and cheese based cast (as in the dairy product not the game approach) were too much for my ragtag band. Some pictures of the glorious defeat below (including some of the Imperial Terrain scenery I had printed and painted for the event). Note Obi Wan ‘Cow-nobi’ in action!

My second game was against my regular 7TV nemesis Keiron, who had pulled together a really effective cast based on the most recent Star Wars trilogy. Played on a rather splendid Hoth based table with a vintage Kenner AT-AT toy as a centre piece, my cast (led by Grand Moff Hertzog) valiantly tried to complete the mission objectives, but were rather humbled by the new generation of Rey, Finn and a very pesky BB-8 who managed to fly across the board and steal the main episode objective on the first turn!

After an extended lunch break (lots of catching up and chat), my final game of the day was against Simon C (head honcho at Board in Brum). Simon and I had not played each other before despite being at many of the same events over the last few years, so it was great to finally get a game together.

The scenario laid down in this final game was the culmination of a narrative that ran through the day which saw the oppossing casts trying to locate a lost fleet of ships. The aim of this finale was to activate (or deactivate) a number of shield generators in the centre line of the table. This was an Imperial on Imperial engagement and despite actually getting to at least one of the objectives I ended up defeated (primarily because all of my cast were wiped out by the surprisingly and out of character accurate shooting of Simon’s Stormtoopers).

All in all an excellent day playing a favourite game in a favourite setting with some splendid opponents. A big thanks to Simon for hosting and Mike Strong for organising the games and storyline for the day.

The next 7TV event I am attending I am also arranging and this will be at Dales Wargames at Darley Dale near Matlock on Sunday 21st November. It’s the (pandemic) delayed 7TV Apocalypse Event, White Line Fever. Following that there is another event at Board in Brum in January which will be 7TV Fantasy oriented.

The other weekend I attended my first show for about 18 months, helping out Wayne at Tangent Miniatures on his trade stand (and also selling some licensed 3D prints).

This was my first time at Partizan (though I had been to the venue previously for Hammerhead) and it was also my first time trading at a show since I wound up Twisted Pinnacle Games a few years ago.

As one of the first shows after the extended pandemic closure of such things it was very well attended with people obviously really keen to get back into the swing of both playing games and spending money (which was great for us).

All in all a very enjoyable day in good company with the added bonus of selling some toys. I was also very good and only bought a couple of spray cans (from the Colour Forge range who had a stand next to us). More on this newish range in a future article.

Next up for Tangent is the big one at Salute in London’s Docklands in November. I shall be there helping out again, though not sure I’ll be able to be so controlled when it comes to the spending this time!