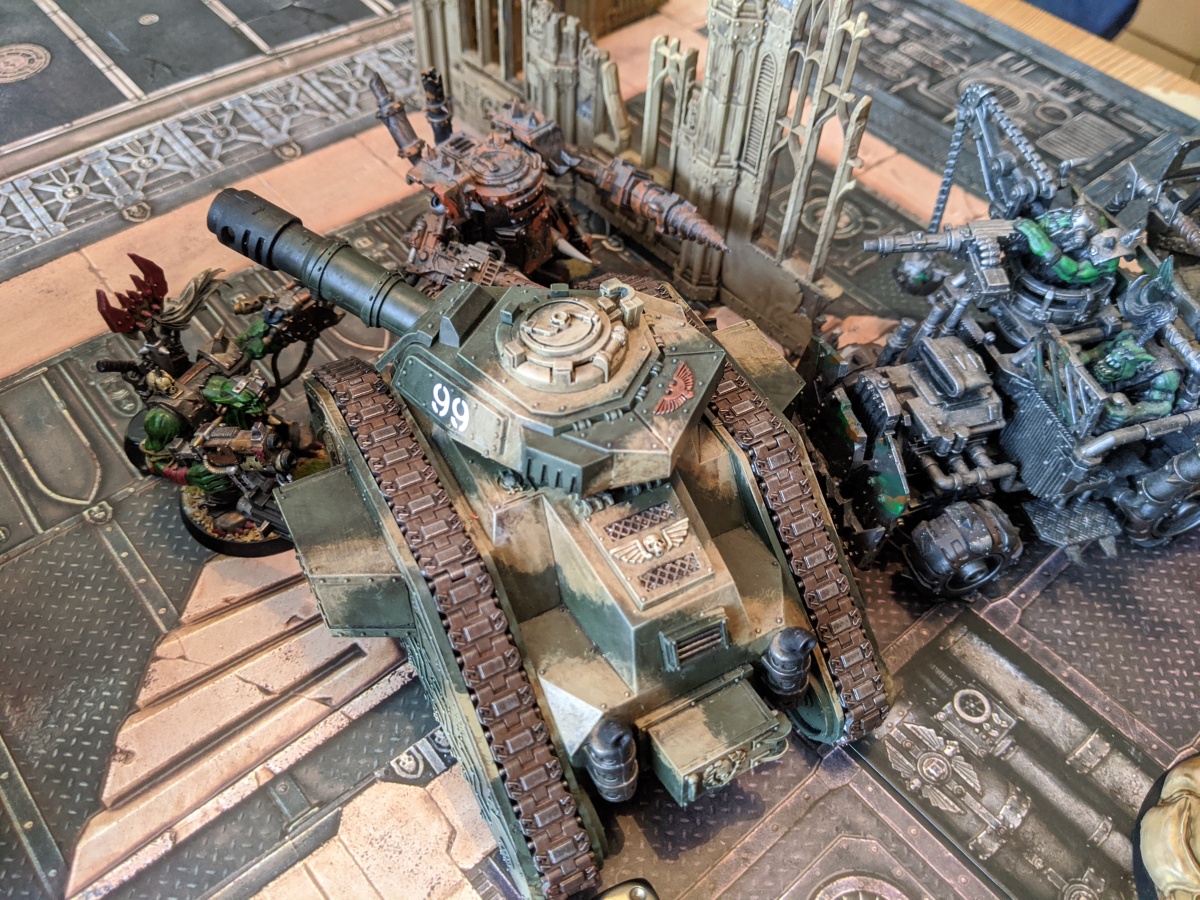 A couple of weeks back, prior to the latest pandemic restrictions kicking in in our particular area of England I actually managed to play a game of something. In this case Warhammer 40k, which I have not played for over a year.

This was the first time playing 9th edition and having sold most of my 40k miniatures I was able to borrow a force and be guided through a game by my good friend Jamie.

We played the new ‘combat patrol‘ rules which allows you to play smaller quicker games, but without skimping on the big units (and in my case as a dyed in the wool Imperial Guard player….TANKS!).

Now I am not brilliant at remembering rules and am never paricularly scientific about analysing games, but my main conclusion here is that 9th was a lot, lot more fun than 8th.

I played Guard facing off against Orks. Extra narrative was added by using the new set of ‘Open War‘ cards. These allow you to setup and play fun games really quickly and include things like deployment, objectives, twists, ruses and sudden death!

The game started off well for me with an initiative win and proceeded fairly positively from then on. It was back and forth and most importantly based on my previous more negative experiences was fast! Even though the turn sequence followed the standard IGOUGO format that Warhammer has been using for decades it felt fluid and interesting. This was helped significantly by some of the new rules (in particular the ability for vehicles to fire in close combat and not get bogged down), but also by the open war cards and the smaller force and table sizes enabled by the combat patrol rules.

The game lasted about two and half hours (yes we actually played a game to a five turn conclusion) – thank you again combat patrol! Apparently this was one of the longer games Jamie has played in the format. This bodes well for evening games once we are able to meet face-to-face again.

And, although it is never my reason for playing any game, I actually got a victory under my belt. Yup, I actually won something! The MVPs in my borrowed Cadian force were my mortar team and my off table support. Nuking the site from orbit – it is always the only way to be sure.

I might just start up another Imperial Guard force of my own now, quite possibly using some of the excellent proxy models I have got from the Anvil Industries 3D print file Patreon.

#newblogpost updates to my 28mm scale post apocalyptic wastelands project.
Bandai Gundam 1:35 kit, EFGF 'hover AFV'. Intend to use this for 28mm gaming as the scale looks adaptable. Might switch out the turret with the oversized machine gun, but otherwise looking good for games of Stargrave and 7TV.
More preparation for 'A Billion Suns'. These are ships originally from the Commands and Colours Red Alert game by Plastic Soldier Company. Going to be a quick spray and wash paint job on these.