The journey through the post-apocalyptic landscape that is my pile of unpainted models continues.

Next up some of the cultists that were released by Crooked Dice originally as part of the 7TV Apocalypse Kickstarter campaign and now available via their webstore.

These are nice chunky models and were a pleasure to paint.  Resisting the temptation to go down the contrast paints route on these like I did on my ‘protect and survive’ miniature, I concentrated on a more traditional approach.

I wanted to tie these guys together as a warband / cast while still reflecting their indivduality.  As such I chose a ‘german field grey’ as this base. 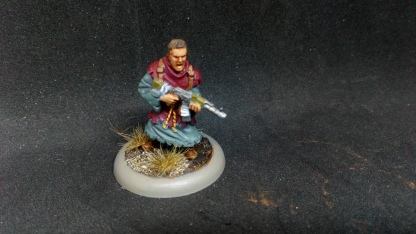 Feeling the call of the ‘fury road’, I also had a go at a test colour scheme for one of the ‘war boys’.  Trying to match the washed out white skin of the characters from the most recent Mad Max film was a bit of a challenge, and in the end I went for a combination of white drybrushing over a grey undercoat with some restained use of flesh wash.  Oh and don’t forget the chrome!

I also wanted to expand my generic cast of ‘survivors’, with the intention of using these not only in games of Apocalypse, but also in other settings.  A while ago I bought the Walking Dead miniatures game from Mantic, purely for the figures.

These are plastic and one-piece (and also by far the best miniatures I think Mantic have ever produced – at least from a quality control perspective).  I’m thinking that these would also make an ideal ‘resistance’ for modern day 7TV (perhaps facing down an invasion of visiting alien invaders)? 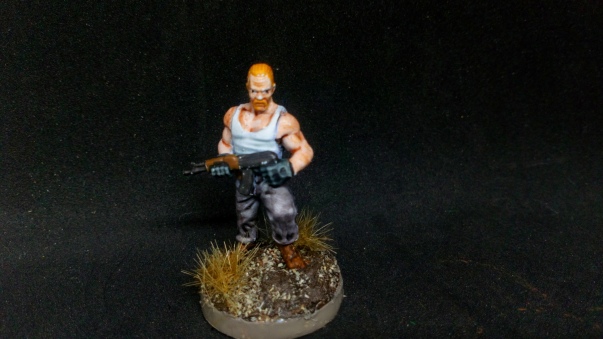 Next up (and in the same vein as the ‘Mantic survivors’), a female member biker, built from the Warlord Games Project Z Motorcycle Gang set.  These are former Wargames Factory models and are somewhat more spindly than their Mantic counterparts.  That said I found this a really enjoyable kit to put together and paint.  The majority of the figures on the sprue were bike mounted, but there was the opportunity to build a few ‘foot troops’. 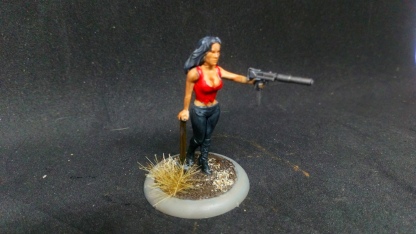 Finally (and from way way way back), we have a Prince August Future Shock ‘police scientist’.  This is a one piece metal miniature – I decided again to paint him in a way that he could be used across multiple settings (he has a touch of  Spy-fi evil genius about him.  Black Templar contrast paint was used for the primary colouring here, with some fluroescent green and yellow on the flask / syringe.

I’m finding Black Templar a really useful colour for doing black leathers and fatigues on modern setting miniatures.  It works particularly well for me over a grey undercoat, giving a nice coverage of black while retaining the highlights that both the undercoat and constrast paint emphasise

Next up for this project is a biker gang (and police opponents) which I am pulling together from Crooked Dice, Project Z and Future Shock ranges with a bit of kit-bashing on the way….. 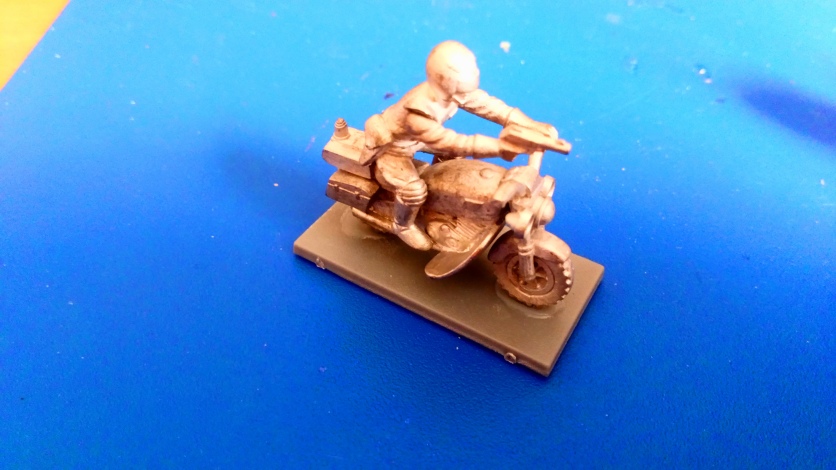