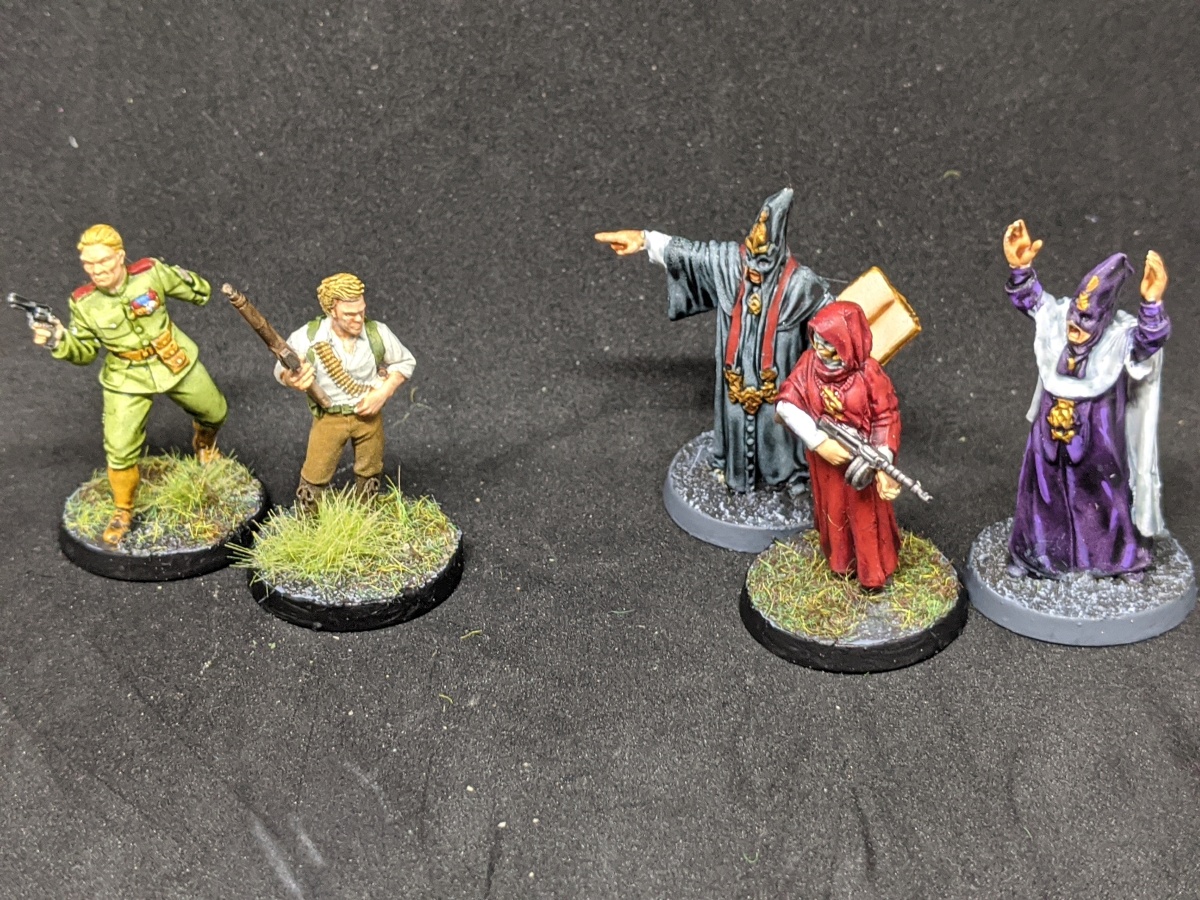 With the imminent arrival in the post of the Crooked Dice 7TV Argonauts Kickstarter I’ve been trying to clear the decks a bit. That has mainly involved revisiting both my post apocalypse and pulp projects.

On the Pulp front I have had both Crooked Dice and miniatures from the Cthulu Death May Die boardgame half finished for quite a while.

First up some cultists from the latter. A mix of colours and paints (including some contrast) were employed here. The tommy gun armed female cultists are not from the core set and add a bit of variety. My intention is to use these miniatures in games of 7TV Pulp.

Continuing with the Death May Die miniatues I have also started painting up the character models, including this one which really caught my eye. A military veteran by the looks of things, with a Soviet flavour, I’ve not actually read much around the game so don’t know his actual background.

On the side of the heroes we have one of my favourite sculpts ever for 7TV. You may remember him from such insprirational sources as ‘The Land that Time Forgot’ and ‘Warlords of Atlantis’….

Slightly out of leftfield I also had this very characterful home guard figure from Warlord Games Bolt Action Operation Sea Lion range. I’ve painted quite a few World War II British miniatures in the past, but I wanted to try out a suitable contrast paint for the uniform for the first time.

I ended up going with Aggaros Dunes over a grey undercoat, which was a relatively good match (albeit a little light).

Finally, staying Pulp but switching to science fiction we have this bombastic fellow. I actually lost a couple of the bits for this model. He was suppossed to have wings and be wielding a mace, but both are lost somewhere on my cellar floor. So diving into the bits box I dug out a suitably retro rocket pack and ended up 3D printing a raygun holding left hand. The latter was from a past Bombshell Miniatures monthly Patreon release. 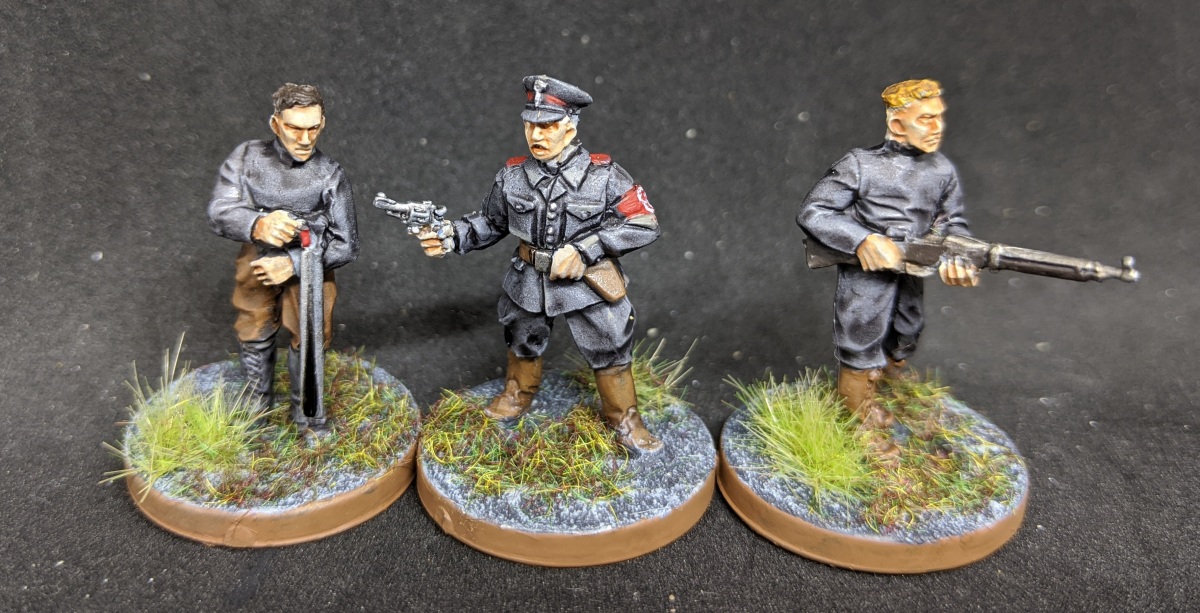 In between everything else I am finishing off at the moment I got the chance to put the final touches to a few Pulp themed miniatures (some of which I have had on the painting desk for a long time).

First up a trio of ‘bad ‘uns’ from Warlord Games. A BUF section leader and two blackshirt goons. Ostensibly for the ‘Very British Civil War’ or ‘Operation Sealion’ settings, I’ll be using these guys in my games of 7TV Pulp. Always good to have a few fascists to give a damn good thrashing to.

Next, more evil! This time a tommy gun armed cultist from the CMON board game, Cthuhlu Death May Die. Just slightly bigger than 28mm this lady owes her allegience to Hastur and is from that same expansion set.

Next up, another rotter! This time a Crooked Dice 7TV Pulp era gangster. The base for this no good scoundrel was aquired from a set of Batman Miniatures Game figures I have not yet done anything with.

This next guy could sit in any number of settings or factions. I have had this figure for years (it is in fact from some of the left over stock I had when I ran the shop). He’s a Kung Fu master from the Ral Partha Europe Pulp Adventure range.

Finally for now, some space based adventure. Here is one of the macguffin markers from the recent 7TV Pulp Science Fiction Kickstarter. Wouldn’t look out of place inside an Imperial palace on a far off world.

It is joined by some ‘Alien Legionaries‘ in an alternative blue garb (as opposed to their movie inspiration red). 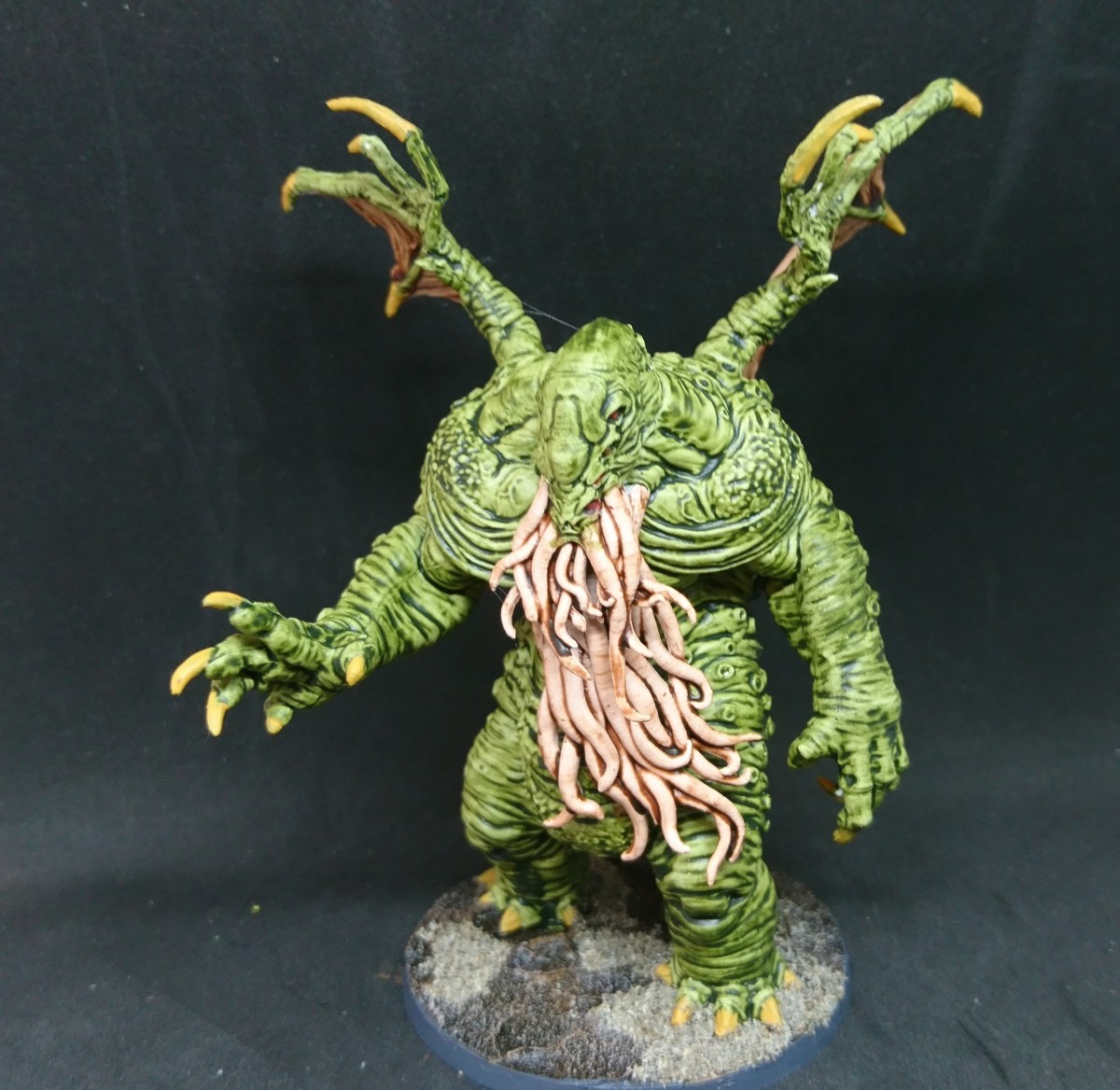 Just prior to Christmas I picked up a copy of the newly released Cthulhu Death May Die board game by CMON.  This was another case of miniatures, rather than game driving my purchase decision.  In fact it was yet another case of thinking ‘oh I could use them in 7TV’, 7TV Pulp to be precise. 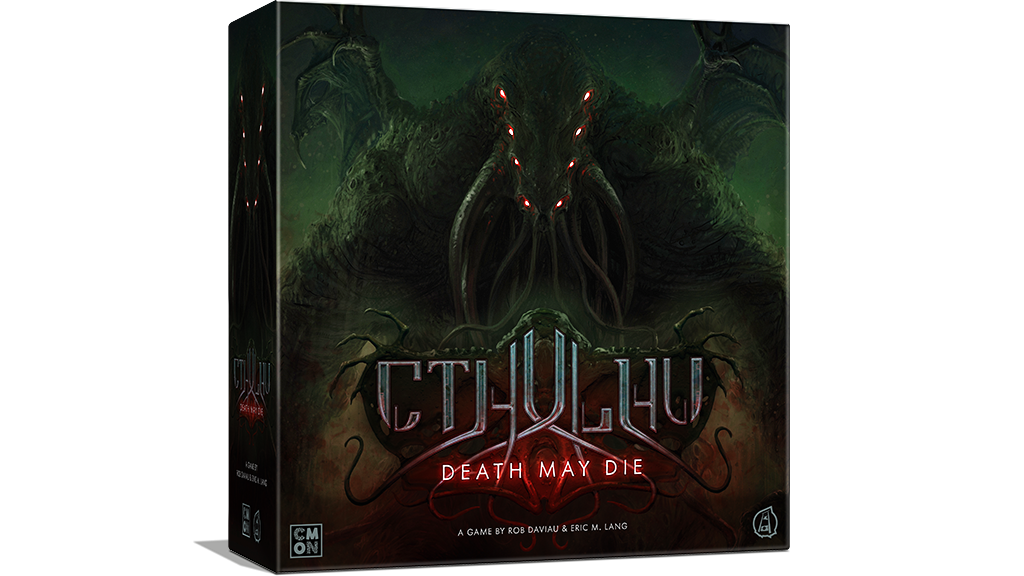 I’ve played quite a few Cthulhu themed games and continue to quite regularly with my weekly board gaming chums.  Favourites include, Mansions of Madness and the epic Cthulhu Wars.  The general consensus in our circle when Death May Die was launched originally on Kickstarter some time ago, was that although it looked nice and had the usual high quality components and miniatures that CMON regularly knock out, the theme and general approach seemed a bit too ‘shooty’ and not ‘investigator focussed’ enough for the setting.

Fast forward and I am browsing the posts on the 7TV Productions Facebook page and see a size comparison of 28mm scale Crooked Dice minis and the one-piece pre-assembled plastics from Death May Die.  The size is almost spot on, maybe a touch larger than 28mm, but certainly not too noticeable.  The sculpts themselves are lovely, with a nice mix of character models, minions and monsters.  Way back in the day I went in heavily on the original Zombicide game and expansions.  I have to say in comparison to this, the quality of the minis that CMON are producing for their board games has improved leaps and bounds.  Clean and crisp, with none of the old problems of thin bendy bits or soft detail.  There is the usual issue when using board game miniatures with skirmish wargames that your troops or minions tend to be all of a single or limited number of poses, but I can live with that.

With 7TV Pulp having a very much Cthulhu inspired theme as one of its genres I took the opportunity not only to pick up the core box of Death May Die, but also a few of the expansions.  There are some really nice big monster models here that I hope to be able to use with the upcoming release of the 7TV Menagerie of Terror card set.

The miniatures themselves are all one piece or pre-assembled in a quite hard PVC plastic which has made painting relatively easy.  Using mostly contrast paints over primarily a white undercoat I have started so far on the minions and monsters with a view to ploughing through these and spending more time on the character models later.

While I will probably give the actual game a try at some point,in the meantime I am cracking on with the painting, including the big fella himself…..