I’ve been recently revisiting my 28mm scale post-apocalypse miniatures. In particular those that have been in a state of semi-completion for some time.

Prior to the current pandemic I had organised a 7TV Apocalypse event at our club, which sadly had to be put on hold. (As an aside we are starting up club meetings again at the end of May after a 14 month hiatus – some actual gaming, can’t wait). Any how as part of the prep for that cancelled event I had continued to work on my 7TV Apocalypse Kickstarter miniatures. In addition since then I have added to the unpainted pile by adding in a whole load of 3D printed models. So plenty to revist.

First up is a vehicle – this has sat 80% done for about the last two years. Based on an Warhammer 40k Ork Wartruck kit I swapped out the greenskin crew with a Crooked Dice ‘vehicle gunner’ and some bits from the old Project Z biker sprue.

I had already weathered this bad boy up a fair bit, but I tied it all up with a brush on application of Army Painter Strong Tone Quickshade. Once dry ,a once over with a matt varnish sealed everything together.

Most of the figures I am painting up for this project at the moment would, I suggest, fit into the category of ‘marauder gangs’. Working up from a white undercoat most of the following were painted up using Citadel contrast paints.

To maintain consistency across the ‘gang’ I’ve tried to keep the basing similar, using a dark yellow basecoat followed by a strong tone wash and then a bone drybrush highlight. I’ve used some deep red flock and some wasteland tufts to add some features.

A good gang needs an awesome leader and I have a couple to choose from. First up a 3D print from Cyber Forge (Titan Forge Miniatures). QB Turner has a certain resemblance to someone who perhaps might be at home running some sort of dome based gladitorial games. (She also doesn’t need another hero.)

Secondly there is the big fella himself – the humungous one, who for the purposes of my games is henceforth to be referred to as the Lord Beefcake. This is another 3D print, this time from the recent Kickstarter by Kirstie Greyskull of Powersword Miniatures.

(I also have a similar model from Crooked Dice that I am also going to paint up shortly.)

The good guys (if there is such things in the wastelands) don’t miss out totally either. These two are both 3D prints from Cyber Forge again. I particularly like the child who is a sort of mix of the feral kid from Mad Max 2 and Newt from Aliens.

That’s it for the time being, but I have really got the PA bug again, so am continuing to paint up more from the genre from my pile of shame. I’ve also recently picked up a really interesting looking model kit that I think will fit in with these guys really well. 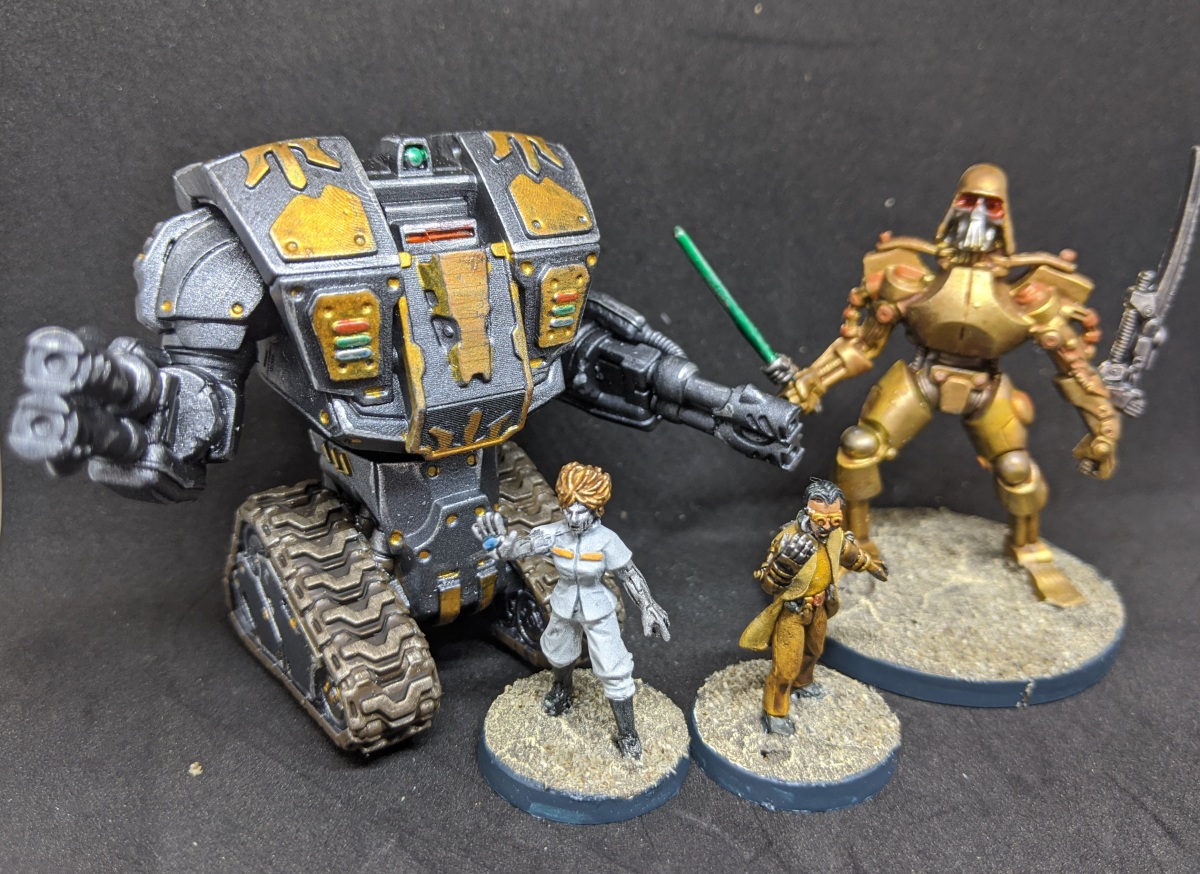 I’ve been spending some time recently painting up more of the figures I got as part of the recent Crooked Dice 7TV Argonauts Kickstarter. In addition to the miniatures that I received as part of my pledge I have also been expanding the force with other suitable models from my collection.

For those not in the know, the Kickstarter was to fund a programme guide for 7TV with associated miniatures and profiles to represent the evil Doctor Ulysses Argo and his monstrous robotic creations. As a ode to fantastic and cult TV and cinema of the 1960s and 1970s, the original ‘spy-fi’ version of 7TV has always had a place in my heart. In painting up and modelling this cast for the game I very much wanted to reflect that style of the times, so have gone with a suitably ’70’s beige’ palette.

The majority of my robotic characters would have heavy gold and bronze accents, with my more human types wherever possible sticking to the mustards, yellows and browns from the decade that fashion forgot.

Nowhere is this more pronounced that in my representation of Argo himself. This was mainly painted with thin layers of various contrast paints and tied together with washes.

Following on we have ‘the Nightmare’, a tribute to frankly one of the most terrifying characters and scenes from an 80s movie of my youth – yup computer cyblorg lady from the end of Superman III. I had originally painted her with blue metallic hair but switched this over to a gold to tie it more in with the rest of the cast.

The Argonauts themselves are robots bearing a not disimilar look to a certain race of metallic beings from a 70s (and susequent noughties) space opera TV show. I have painted these up in a more traditional manner befitting the original source material as I am planning on a separate Battlestar Galactica set of casts in future.

Next up are a diversion from the 7TV models to my old favourites the Tehnolog plastic cyborgs (of which these four represent the last I have in my stash). While I had previously experiemented with a purple colour scheme for one, I have done the rest in the ‘team Argo’ colours of gold and silver. My gold technique is achieved using Humbrol spray paints using Brass as a base and then a light top down highlight of Gold. I intend to use these as proxies for the ‘titans’ in the programme guide.

While I am doing the robot thing, I’ve also added a couple of 3D prints from the Titan Forge Miniatures Cyber Forge Patreon, of which I am a member. While nominally for a more ‘cyberpunk’ setting I have again gone for an Argonauts colour scheme here to tie them in with the rest of the team.

One thing I have additionally done here and in other paint jobs for this team is to pull out some spot colours. In particular I like the idea that not all of Argo’s tech is necessarily homegrown and maybe he has had some outside (even alien help) in constructing his robotic hordes. As such I have used some of the Citadel technical gemstone paints to pick out across various models some glowing red, green and blue lights. This is really an ode to the martians from the War of the Worlds and is particularly apt when it comes to the following two centrepieces for the force.

I’ll be going in to more detail about both the Crooked Dice and Bombshell Miniatures tripod models in more detail in an upcoming blog.

Dipping back into some post-apocalypse themed modelling and painting, I have recently been concentrating on a variety of robots and mechanoids.

Inspired in part by the classic Rifts roleplaying game by Palladium Books I have painted up a Tehnolog ‘cyber skeleton’ miniature as a ‘coalition robot’.

I have purchased a large number of these models over the years and have used them for a variety of projects, however the original box art just screams Rifts to me.

Quite a simple paint job on this using black contrast paint with a light dry brush of silver to bring out some edge highlighting and to give him that solid metallic look.

Next up we have a pair of tracked robots with more than a little nod to Skynet. These were from the recent Bombshell Miniatures Bikes and Bots Kickstarter and were printed on my AnyCubic Photon resin printer.

Printed in parts, I assembled with super glue and gave them a once over of a metallic grey car spray paint I picked up in a sale at Halfords. As an aside I would highly recommend Halfords for good quality, relatively inexpensive rattle cans. I’d particularly recommend their grey primer as a really effective undercoat.

Any how, these ‘drones’ were then detailed with some hightlights of gold and a dot of colour here and there. The tracks were done using my usual approach of a silver dry brush over a very dark brown base coat, followed by a ‘strong tone’ wash.

Finally how about a wasteland survivor to face down the machines? Another 3D print, again from Bombshell Miniatures, but this time from one of their monthly Pateon releases from earlier in the year.

Primarily painted with contrast paints, I’m not sure how much use those revolvers are going to be against the machines though.

It’s even more robots next as I have just received my Kickstarter rewards from the recent 7TV Argonauts campaign by Crooked Dice Game Design Studio.

Plenty to go at there, but I’m also working on another of the Bombshell models from Bikes and Bots as well…

I’m actually in danger of finishing something!  For a while now I have been working through the pile of lovely metal I obtained from Crooked Dice as a result of their ‘Pulp Science Fiction’ Kickstarter.  With only a handful of figures left to paint, I’ve been supplementing these with some of the excellent Princes of the Universe range from Cold War Miniatures (all with an eye to playing games of 7TV Pulp).

So first up we have a Hawkman prince from Cold War.  This was a resin miniature that was a bit fiddly to glue together but was relatively straight forward to paint.  The scale of this range is slightly bigger than the Crooked Dice figures at about 32mm scale, but they don’t look too out of place together.  Anyhow the character on which this miniature takes it’s inspiration is somewhat larger than life!

Back to the Crooked Dice figures, I had not yet given the ‘spider queen’ a lick of paint.  Looking somewhat like a good girl gone bad (perhaps Dale succumbed to Ming’s charms), I decided to go for a white colour scheme to contrast with the darker tones of some of my other villains.

I’d added some additional Otherworldly Guards miniatures to my base Kickstarter rewards in order to have a plentiful supply of expendable minions.  I’ve been trying various colour schemes on these with intention of being able to use them as either good guys or the hordes of the Emperor Ming.

While recently tidying up my hobby area I came across a set of Scale 75 coloured metallic paints that I had previously stocked when trading but never really used.  Many of these were the usual golds, silvers, bronzes and coppers you get across similar ranges, but there were a few primary and secondary colours in here too.  One in particular, Ruby Alchemy, caught my eye as being ideal for a slightly camp set of space soldiers. 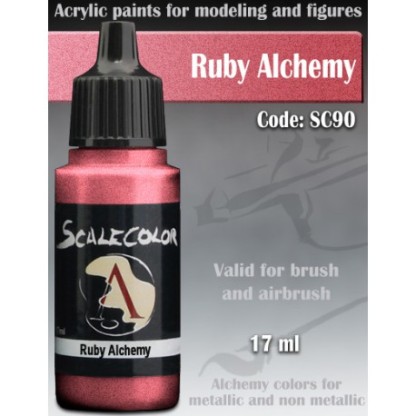 With some additional details picked out with Emerald Alchemy from the same range, I am quite pleased with how these came out.  Depth was added using Army Painter washes and the metallics were picked out with a standard Citadel gold.  Unlike most of my recent painting there was very little in the way of Citadel Contrast paints used here, with only skin tones applied in this way.

The final addition to this little troupe is a 3D print from Bombshell Miniatures.  Printed on my AnyCubic Photon resin printer this was a free sample model that was made available to promote their recent Bikes and Bots Kickstarter.

All in all I’ve really enjoyed the variety and freedom of palette painting these style of miniatures.

While I only have a few of the 7TV Crooked Dice Miniatures left to paint, this months’ set of printable files from Bombshell Miniatures have recently landed via their monthly Patreon and the theme is similar.

The Legions of Mongo continue to grow…..