More work on the post-apocalyptic motor pool as I prepare for my first full game of 7TV Apocalypse.

Never one to start one new project, when I could do two in parallel, I’ve embarked on building the Crooked Dice V8 Interceptor resin kit and also a conversion of a die cast toy.  The latter is going to be the wheels for my PA ‘Penelope Pitstop’ figure which along with the Interceptor I picked up as part of the recent Kickstarter. 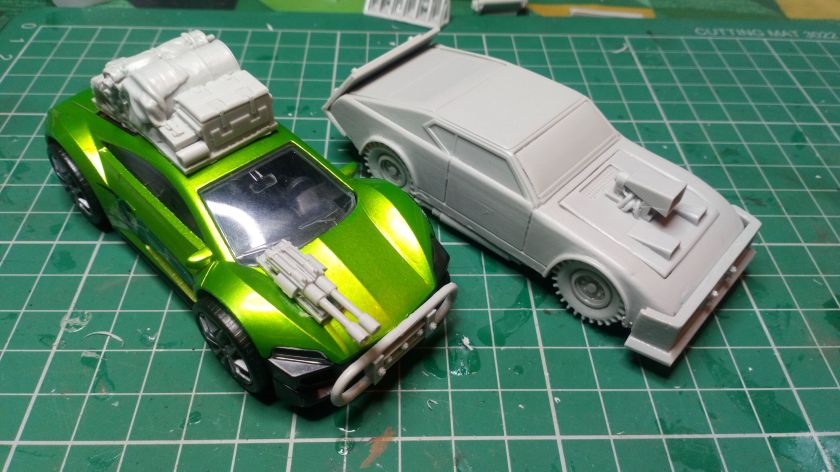 The (second to) last of the V8 Interceptors

So first off the Interceptor kit.  I originally got hold of one of these when they were released last year and made sure I included another in my Kickstarter pledge.  This is a really nice, crisply cast resin model with loads of accessories.  Taking it’s inspiration from the Mad Max films, the extra bits and pieces allow it to be built in a number of configurations.

I had previously built and painted this as a ‘Main Force Patrol’ police pursuit car from the original Mad Max.  Looking back I wasn’t too keen on paint job I’d done, so the chance to built another one and make a better fist of it wasn’t to be passed up.

I’ve decided to go with a much more wastelands ‘last of the V8s’ look for this one, with the addition of the massive rear shield (which puts me in mind of the Death Race remakes of recent years).

Following a soak in warm soapy water and using pound shop superglue the pieces went together really well (with minimal clean up required).  I was also left with plenty of accessories left over to use on other kits and conversions.

The Compact Pussycat (with claws)

Despite having a huge pile of figures to paint up from the Kickstarter all of which are excellent, there are a couple that stuck out that I really wanted to get to the top of the queue. One of these was the aforementioned Penny.  Now of course, Penny needs a ride for the ‘wacky wasteland races’, so off the the big pile of unused Teamsterz cars it was then.

Using some of the left over Interceptor bits and bits from the stowage set I’ve come up with my own interpretation of the ‘Compact Pussycat’ (only this time with guns)!

Paint job has yet to be finalised, and as I have now got the full boxed set of rules through for 7TV Apocalypse I shall also be shortly stating up this motor.

You can purchase the Interceptor kit directly from Crooked Dice, where you will also find the stowage sets and loads of other PA goodies for the tabletop.

You can find Teamsterz (sometimes called Roadsterz) in various discount stores and toy shops up and down the UK.

I recently picked up an inexpensive die cast toy helicopter and have set about quickly adding it to the ranks of Baron Ironblood’s forces.  This was a relatively quick and easy conversion using as it’s basis a Teamsterz Rescue Helicopter, which cost me about £4. 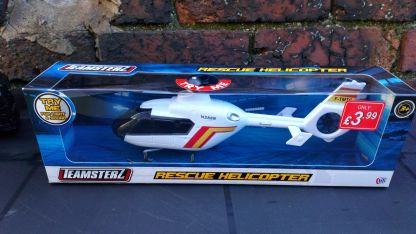 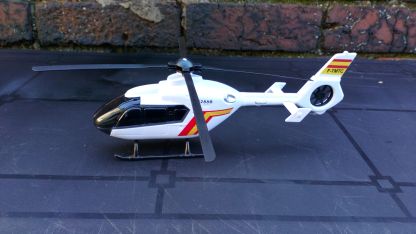 Taking advantage of the unseasonably good weather I was able to spray this up quickly outside using Halfords Black as a primer followed by an all over of Humbrol Crimson and then a zenith highlight (well a top down spray) of Humbrol Red.

The Humbrol sprays while being acrylics were gloss.  I’d didn’t think this would look too out of place for a chopper, however it ended up being a little too shiny, so this was solved with a once over of Testors Dullcote (which also provided a good base for the details and highlights).

The toy had some decent panel lined detail, so I highlighted this using a black marker pen (designed for lining Gundam models).  Windows were painted with Citadel Magragge Blue and tints were applied using a white Gundam marker this time.  Other bits and pieces were painted black or silver and really that was it. 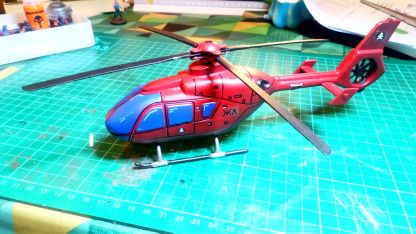 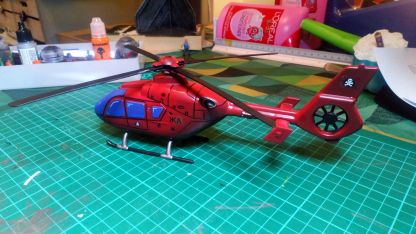 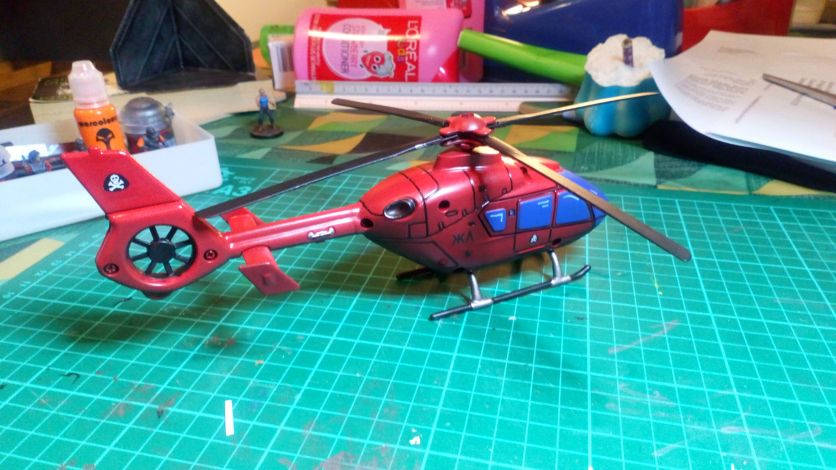 It wasn’t until after I had nearly finished that I noticed the screw holes holding the model together on one side.  Had I realised from the start these would have been filled, however as a gaming piece I can live with this.

Final touch was the addition of some decals which I had picked up a few months back on eBay.

There we have it – air transport for the Baron.  Scale is just about OK for 28mm scale miniatures, if anything it is slightly large, but hey, more room for Mutons!

Next up for the Shad motor pool is an armoured car based on a 1/43rd die cast Puma….

I was recently given the opportunity to go on the long running Meeples and Miniatures Podcast as a guest presenter.

I talk to regular presenters Mike and Neil about my background in the hobby, current projects and purchases and also spend sometime discussing my experiences of working in the industry.

The episode is now available to download for free from their website (or via your favourite podcasting app). They also have a Patreon account setup up if you feel like donating a few pennies to the upkeep and ongoing production of the show.

Neil Shuck & Mike Hobbs are joined by a guest presenter in the shape of Patreon backer James Aldridge for this episode of the podcast. 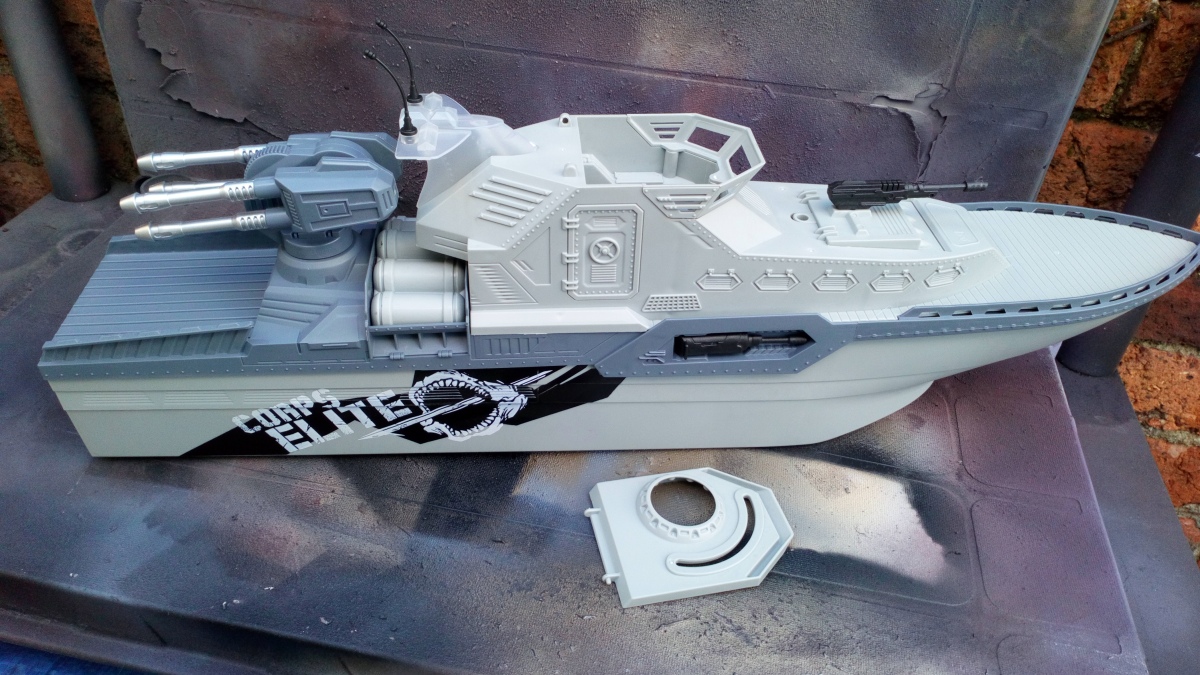 I’ve blogged extensively about my project to realise my favorite action figure toys from back in the day, Action Force.  I have a young daughter, but despite not pushing her in any real direction toys, she has gravitated towards traditional girls toys.  Therefore I am not really up-to-speed with boys stuff, and in particular action figures.  So other than knowing that Star Wars is obviously still a thing I’ve no ideal if there is a modern and up-to-date range of military action figures similar to those I used to play with.  However a few weeks back while stocking up on instant noodles during my lunch break in the local discount shop I happened into the toy aisles.  And there I spotted it!

So this is the Corps Elite Battle Cruiser.  Corps Elite appear to a modern day (but budget version) of Action Force / G.I.Joe, and boy does this one look like it would be perfect for 28mm scale.  As per usual 7TV is never far from my mind when considering these things.

Having succumbed and picked one up, upon initial inspection the vast majority of the components looked like they could easily stay and represent the ‘down-scaled’ versions of themselves.

Having opened the box and inspected the ship, the scale looks pretty spot on for 28mm scale minis.  The flat bottom / ‘water line’ means this will look great on the tabletop. 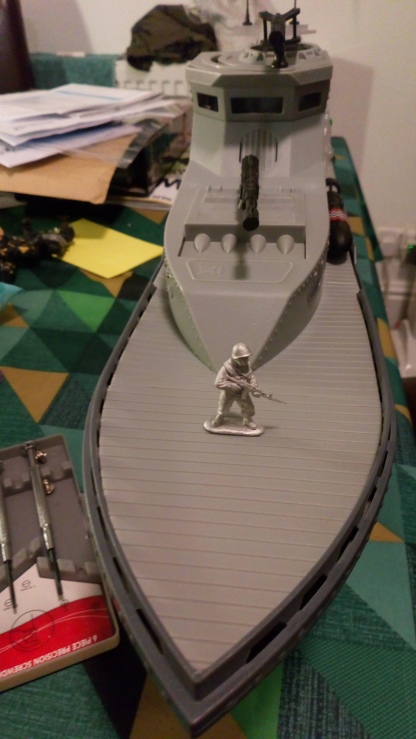 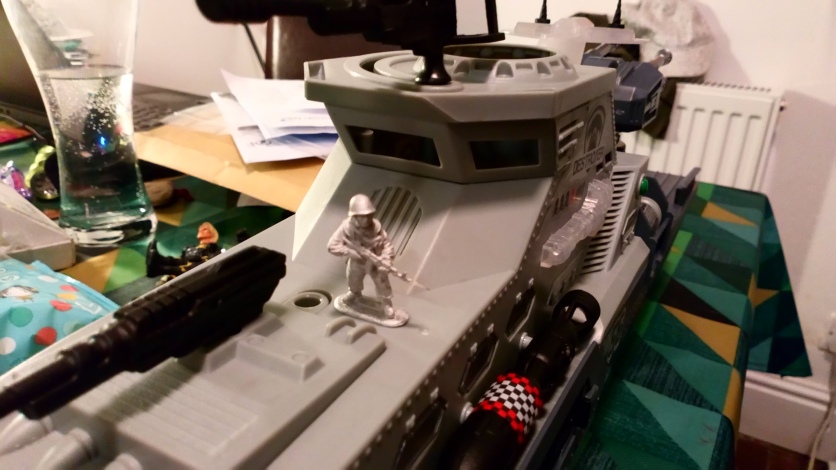 There are a few things that will have to be removed and replaced to really hide the larger scale aspects of the thing, namely:

Painting wise, it looks like a relatively easy job and will be down to a combination of spray cans and airbrush.  The existing decals were easy to peel off and the entire ‘model’ was given an undercoat of black (using a couple of layers in order to effectively mask the painted on pattern on the hull).

It’s also worth mentioning that I’ve had a bit of a look at the wider Corps Elite range.  While most of the accessories and vehicles are way out of scale for the tabletop, I’ve got to say with a bit of work the ‘Beast Bomber’ could make for an excellent centre piece! 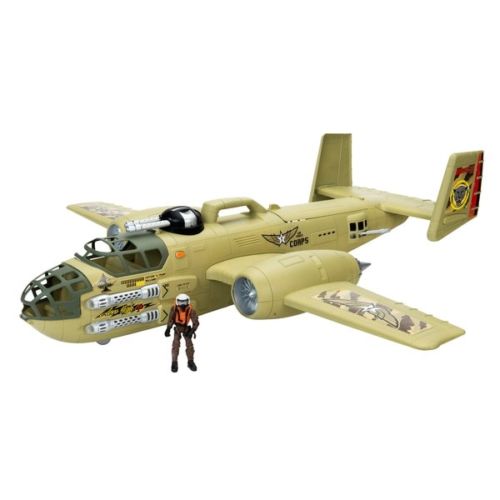