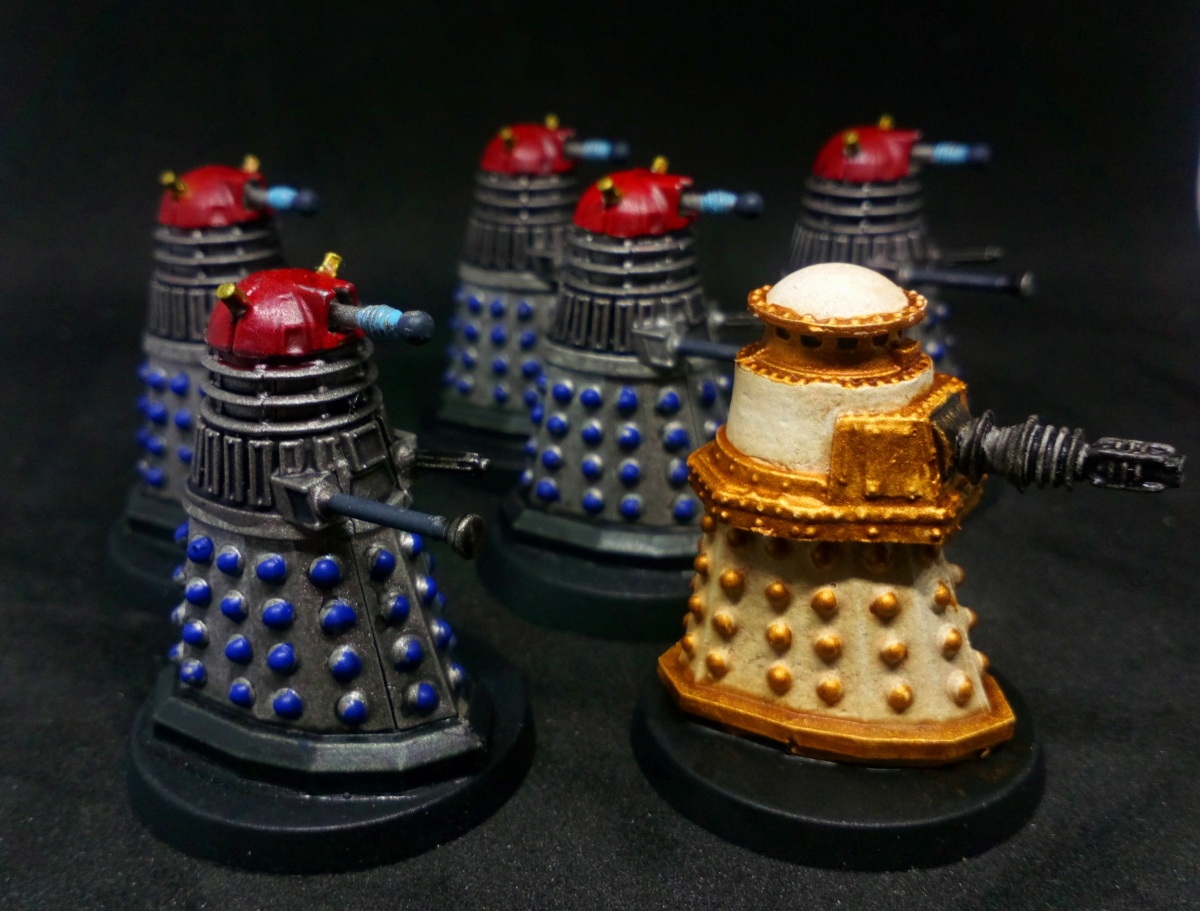 Like most folk in these interesting times I find myself with a lot more hobby time than usual at the moment.  Despite having a number of different projects on the go at the moment (including a recent delivery of my Reichbusters Kickstarter rewards) as per usual nothing ever stops me getting distracted.

I’ve always been a big Doctor Who fan, and so when Warlord Games released their range a few years ago I dove in and bought the Exterminate boxed game.  I played the game a few times, but it didn’t really do anything much for me (and I defaulted back to my standard approach of ‘oh well, at least I can use the figures for 7TV’).

And therein came the problem.  As you may be aware the Warlord Into the Time Vortex range was scaled at about 38mm and so most of the figures are much bigger than standard wargaming minis and so don’t really ‘play well with others’.  The exception to this in my opinion are the plastic multi-part Daleks that came in the core game (and also released seperately with Davros). 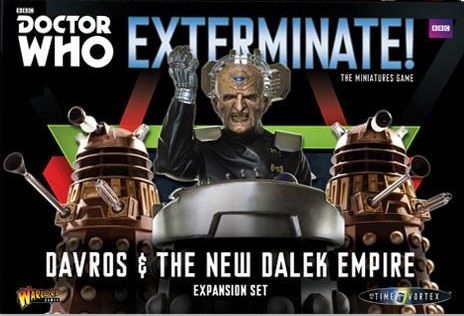 But to base or not to base the muderous pepper pots?  Logic states that to minimise any scale discrepancies when mixing these with others, then leaving the Daleks unbased would be the way to go.  However logic is for Cybermen!  Also the only real option being to place them on 28 or 30mm bases, and that just looked, well, odd.

Any how having filed my painted (unbased) Daleks away in their very own Genesis Ark (i.e. a box in the cellar) I forgot about them for a few years.  That is until I was tidying up the other day and came across a set of basecoated but otherwise unpainted squad of Daleks.

Having previously almost exlusively painted these guys so far in a bronze scheme as per the new series, I opted to go with a more classic series feel for these guys.  One of the more obscure Daleks is the so called ‘red top’.  Real creator of the Daleks, Terry Nation (not Davros), had a small collection of full sized props and when interviewed for Doctor Who’s 10th anniversary back in 1973 one of these appeared in the photoshoot.

A combination of props from the TV series and the sixties films, ‘red top’ had well, a red top (while the rest of the body was the standard silver and blue).  There’s something quite retro about this look that puts me in mind of the crazy sorts of random livery that the Daleks often had in comic strips.

I used a combination of standard and contrast paints for these guys.  I also remembered why I hadn’t painted any in a few years….  Those blasted globes on the bodies – I very nearly gave up (due to a combination of boredom and cramp). 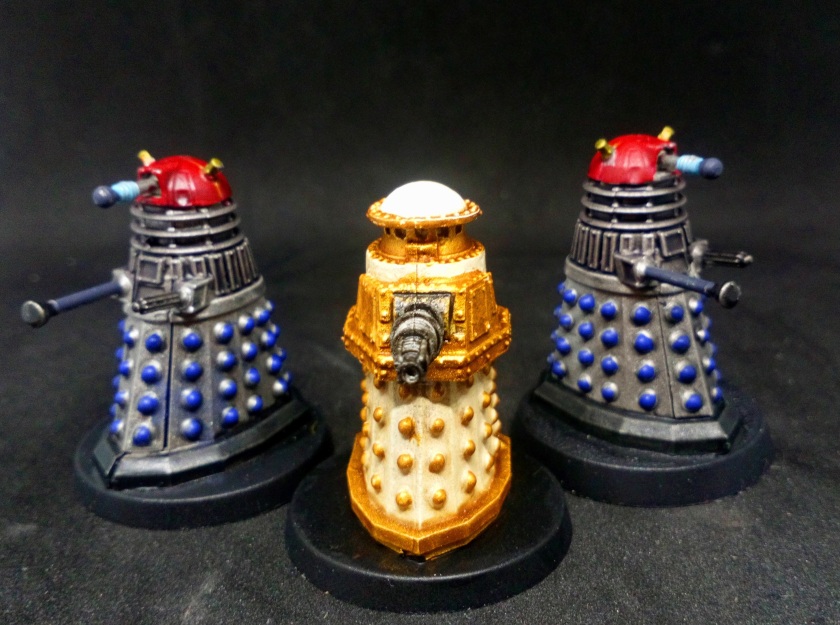 In addition to the standard plastic ‘drones’, I also had a couple of half finished metal models, the Supreme Dalek and the Special Weapons Dalek.  Not too happy with the former, but think the latter came out OK. 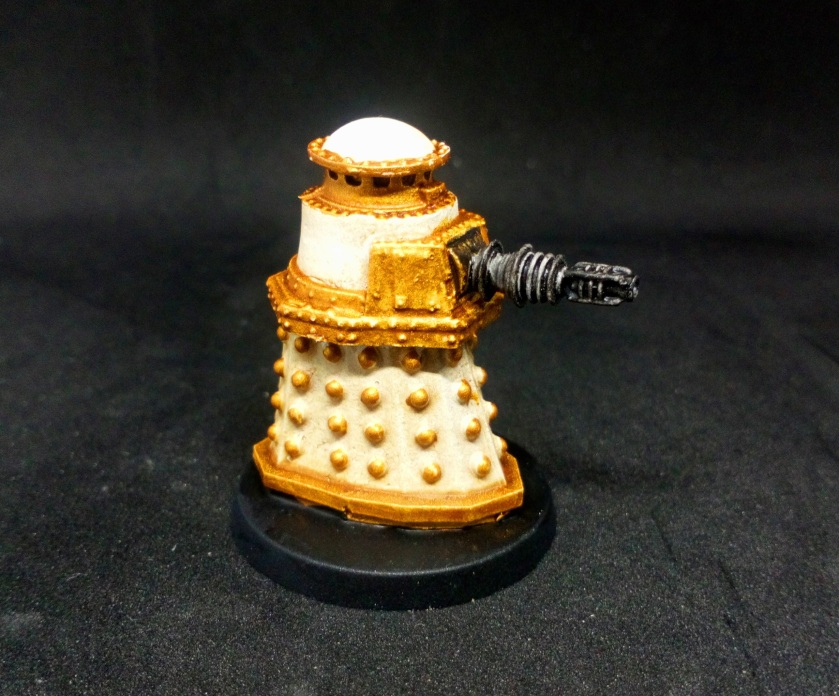 So what’s all this waffle about basing then?  Well since then Primaris Space Marines have happened.

Well they introduced the 32mm circular base.

Just the perfect size for a Mark III Travel Machine!

One thought on “Mark III Travel Machines Conquer and Destroy!”